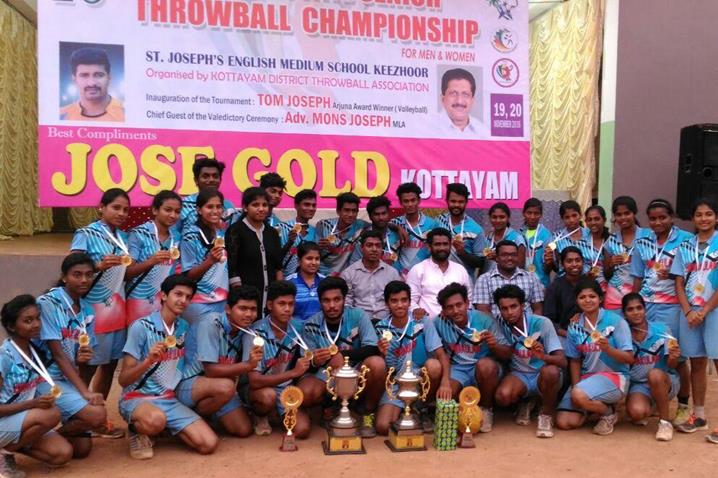 Ernakulam won the men and women title in the 15th Kerala State Senior Throwball Championship for men and women 2016-17 which concluded at St. Joseph's English Medium School, Keezhoor, Kottayam on 20th November 2016. I Men's Ernakulam defeated defending champions Kannur in straight sets (15-4 , 16-14) in the second set kannur were leading by 13-9 and from there Ernakulam boys came back with a strong attitude to become the champions. For them it a sweet revencge to the defending champions for the last years men finals. Hardick Selarka, Mohammed Rizwan & Captian Fredaric Joseph (Freddy) were the players who performed marvalously throughout the championship..

In women, Ernakulam had a easy win to claim the K C Philiphose memorial ever rolling throphy by defeating the host district Kottayam and bagged the tittle for the first time (15-3, 15-7) Miss. Razeena A S, Soorya S, Anjitha A D, Nivya K S and Maheshwari N Shetty performed extremely well in the final and through out the championship.

Hardick Selarka in men and Raseena A S in women of Ernakulam were selected as the best Players of the championship. Abdul Huck of Malappuram and Anarga Arsha Alexander of Kottayam were annouced as the Promising players.

Sri. P J Joseph, was the Observer for the championship from Kerala State Sports council.